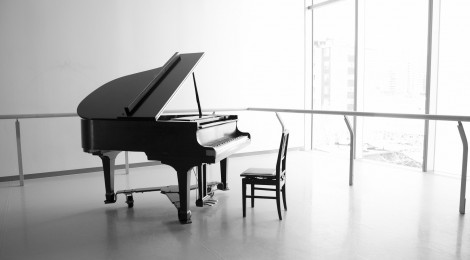 When I first started working electronics into my live performances more than a decade ago, I was mostly running loops from my computer using Logic and Ableton Live, building textures out of looping samples and putting them through effects, and playing modal improvisations on the piano. Sometimes I also miced the piano, and ran this through delays and reverbs on my computer. I think a new paradigm has developed, of instrumentalists who perform with electronics, recording themselves playing short phrases into Ableton Live, looping them and building masses of sound. It’s a great approach because one can build sets from scratch, on the fly.

But sometimes I found this a bit limiting, as I wanted to compose more structured pieces, with elaborate phrases and rhythms, worked-out forms with twists and turns. So I started pre-composing “pieces”, and sequencing the non-piano parts (drums/beats/percussion and electronic sounds), and I would play the piano parts live, in tight synchronisation; more like playing concert pieces for piano and “tape”. A friend of mine said it all sounded as if the audience was somehow able hear the imaginary orchestra in a pianist’s head. Here is a link/excerpt of a piece called “The Cataclysm” from my album “Unfolding”, and another called “Uprising” (although in this case the “ensemble” more resembles a jazz trio, rather than an orchestra).

After several years of using this configuration, in the last while I’ve wanted to re-incorporate some of the elements that I used when I first started using electronics live. I’ve always enjoyed living between the extremes of meticulously planned composition on one side, and intuitive, live processing and improvisation on the other, and now I’m able to re-visit my original techniques which I was so happy to explore at first when getting into electronic music, with fresh ears.

For tech nerds out there who might be interested in what gear I’m using, here is a picture of my setup, taken before a performance at the Canadian Music Centre: to my left side is a Nord Lead 3 synth, and on the piano stand are my MacBook (running Ableton Live), a Korg NanoKontrol, an iPad, a Mackie 12-channel mixer, and I’ve recently added a tiny MIDI keyboard. The Nord Lead synth is so flexible that sounds are like putty in your hands, and the piano contact Mic and iPad (using various sound-generating Apps) are processed through delays and filters on my computer. I can manipulate all the effects parameters through a Korg Nanokontrol (a small bar with lots of knobs, faders & buttons), more intuitive and “hands on” than clicking with a mouse.

The MIDI mini-keyboard is only 3 octaves, controlling a virtual synthesizer on my computer called Reaktor, which I’ve re-tuned to play microtonal scales (Maqam) found in Middle-Eastern music. This opens up some new dynamics: it’s a counter balance the equal temperament of the piano, and it also there a new tension between the archaic sound of the Maqamat, speaking through the Sci-Fi synthesizer sounds, which I morph through the NanoKontrol. I’ve composed microtonal music before, but haven’t worked it into my regular live setup until now. Here is an excerpt of a track from my album “Unfolding” called Jinju Dervish, in which the third degree of the scale is lowered by a quarter-tone.****
Also here is an excerpt from a piano improvisation recorded for The Signal in 2007 by CBC Radio 2, in a style I called the Atonal Maqam. It uses asymmetrical scales rather than quarter tones, but it’s just a different approach to satisfy the same musical inclination.

My pieces for piano and electronics usually are less than 10 minutes long. This new piece will be on a slightly larger scale, at least 15 minutes. I’m still not sure whether this will be a beat-driven piece or not. I’m considering whether it will all be in one movement, or possibly divided into 3 shorter movements, each exploring a different aspect I described above. Each could be short and snappy, like the Stravinsky Piano Sonata. Since a lot of my piano writing has been on the virtuosic side, it would be interesting to make a piece where the piano is repeating a phrase, and the electronic textures are changing around it. But it’s all in the inception stage now. With the mixing and mastering of my new album on my immediate plate, these ideas are going to mull in the back of my mind for a while…