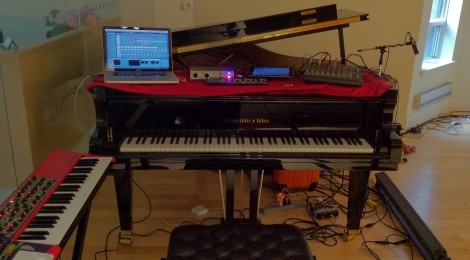 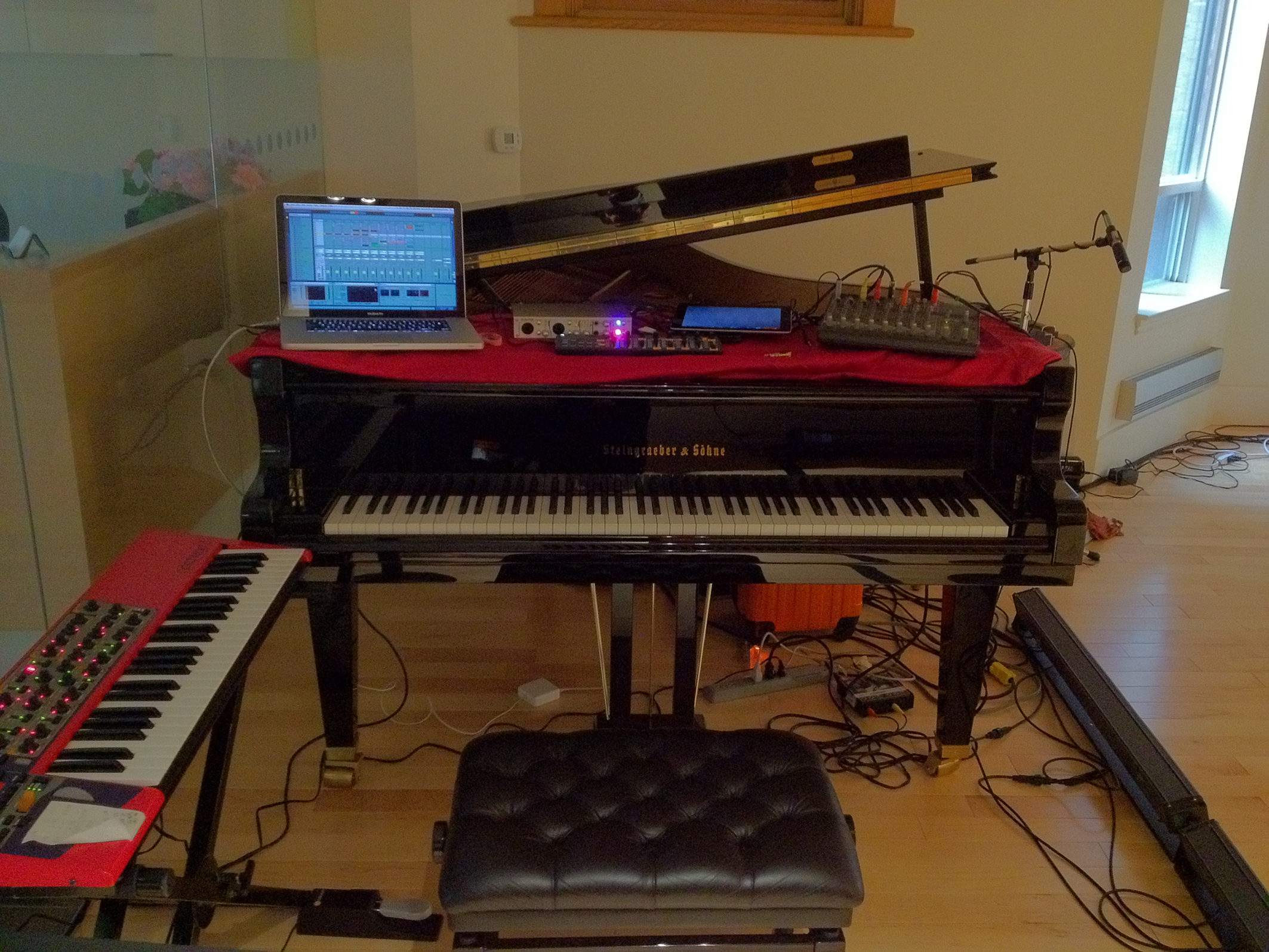 a pic I took before the Nuit Blanche concert at the Canadian Music Centre, Sept 2012 showing my current set-up

I’m very excited to be SoundMakers first electronic composer-in-residence. The timing has worked out well, as I’m just wrapping up an album that has been in the works for a couple of years now, one which I started composing at the Mackenzie House residency in Toronto in 2010, and now that this is in the mixing and mastering stages, I am quite eager to make new music.

In a nutshell, I am a composer, improvisor, producer of electronic music, and visual artist. The first three of those have been constant in my life for a long time, always being developed even if one is more the focus than the others; the line between composition and improvisation is often blurred for me. As a teenager my world was split between “classical” piano, Heavy Metal, and middle-eastern music. The Metal part was a result of growing up in Brampton, something one could not help being exposed to. My classical life was lopsidedly focused on Bach and anything contrapuntal. Also around the house, my parents always played Arabic music on the stereo, which made its way into my musical language unconsciously.

When practicing piano or composing as a teenager, I wanted nothing more than to improvise, to take ideas from what I was learning, and improvise on them freely. But I didn’t yet know how to, so I made a long-term investment to improvise a bit daily for several years, and develop my own language. After I went to study composition at university, my world was blown apart when I discovered both Schoenberg (who was my gateway to all contemporary music) and electronic music.

Also at this time, my dorm roommate was always playing Aphex Twin and Squarepusher and all sorts of electronic music. It opened up a whole new world for me. I wanted to start making pieces with loops and drum machines, and use a modern composers tools to make “electronica” tracks that had the same structural complexity that one would find in, say, a Prokofiev piano sonata. Eventually this led to pieces for piano and computer, and put the same degree of depth and intricacy to try to make them as challenging and rich for me as the composer’s whose works I was performing.

I am also interested in exploring musical, historical and cultural connections between Middle-Eastern and European civilisations, not through the catch-phrase “East meets West”, but rather trying to reflect my attempts to understand how they both have continually but upon each other and are in fact coming from the same origins. My upcoming CD is entitled “Between Carthage and Rome”; this is intended to pre-date and circumvent the common paradigm-lenses of “Islamic vs. Christianity” and “East vs. West” which are the narrow terms we tend to use for these entities.

Another aspect of my music, which I see as strongly related to the Middle-Eastern element, is an interest in early european keyboard music. When I was playing an experimental noise gig in 2005, there was a harpsichord on stage, and I reached over and played it during my set. The harpsichord builders were in the audience, and after they generously lent me one of their instruments to compose on, including books by English Renaissance composer William Byrd. This was a revelation for me, as much as atonality and electronic music was. The dense counterpoint, ornamentation and rhythms were more archaic sounding than Bach’s, yet compellingly logical. I also saw the harpsichord as a kind of “Kanun”, a middle-eastern precursor to later keyboard instruments. So I would play the Harpsichord sometimes in ways that were more idiomatic to Arabic music, and then to find easy to integrate these different sounds. The possibilities of different tuning systems, forms, rhythms and endless ornamentation in Arabic classical music and Renaissance music also interested me – as a first generation Canadian, I would not make “authentic” music, but draw on it to make my own connections.

In each of my concerts and large-scale works, though working with far-flung musical idioms, I try to make so that not only the pieces work well individually, but that there is a larger overall narrative, as if they are all movements in some surreallistic Sci-Fi piano concerto. I enjoy improvising at the end of my pieces, and transforming the material slowly into what will be the beginning of the next piece. Part of the enjoyment and challenge is taking such disparate elements and tying them together so that although each concert ranges from fugues to breakbeats and everything in between, they are all compositionally tied together.

When time and circumstance allows me to work on my ink line drawings, I find oddly enough that instead of it distracting me from my music, it actually helps my musical creative process flow more smoothly. I try to capture something of the endless unfolding of reality with continuous variation of line and texture, riding a tension between figurative and abstract. Though the word “detailed” may be an easy descriptor, I actually am not interested in needless detail for its own sake, but rather I am trying to imply endlessness or infinite, and this applies to my music as well.