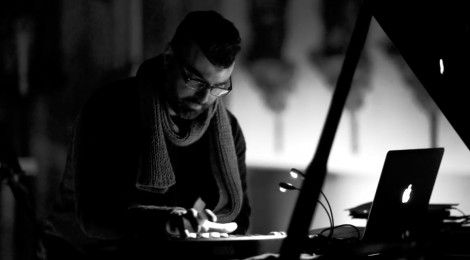 Q: Who or what inspired you to take up composing, and pursue a career in music?

A: I wanted to make my own music from my earliest memories. I went crazy for Bach  as a child, and I begged my parents for piano lessons, and kept on trying to blindly emulate Bach, with no idea what I was doing. I made a tape recording in grade four where I tried to imitate swimming dinosaurs by recording the sound of bubbles in the sink, alternating with stomping piano chords (I played it for my class and they burst out laughing).
I also wanted to improvise, even though I had no improvisation teacher. But I was impatient, so I just improvised for years on my own, trying to incorporate elements from the classical pieces I learned, and slowly I developed my own improvisational vocabulary. I think for many artists, it’s clear at an early age that you’ll spend your life in the arts creating, even though that might be well before you’re old enough to even know what a “career” really is.
Q: Who or what were the most significant influences on your musical life and career as a composer?
A: Every few years, I would discover a composer or type of music that would be like a musical earthquake. The first and biggest was Bach. Then came Gould, Wendy Carlos, and Heavy Metal (I grew up in the suburbs of Toronto). Discovering Schönberg and atonality was like eating my first olive: at first I wanted to spit it out, but then I wanted more.
My roommate in university was listening to electronic music, Aphex Twin and Squarepusher – that blew my mind open. As I was studying composition, I started trying out ways to incorporate these electronic sounds into the “classical” approach to composing. The keyboard of William Byrd expanded my concept of counterpoint, it’s so quirky and ornamental that it suggested new ways to bridge over into Middle Eastern music, and mix counterpoint with Arabic scales and rhythms.
Q: What have been the greatest challenges/frustrations of your career so far?
A: To many creative people, the music industry or art world can be a bit of a jungle, and it can be daunting, to remain true to yourself within this complex network of highways. Your basic artistic drive is to communicate your imagination and innermost thoughts with other souls, but you have to climb over this unknown terrain while holding that burning candle, and you hope that when you finally clear the hurdles and get to the listener, the candle is still lit.
Q: What are the special challenges/pleasures of working on a commissioned piece?

A: Ideally, one wants to be free to compose whatever he/she wants, and the constraints or expectations that come with a commission could conceivably hinder your creativity. But also, those same factors can help things along, by giving you focus.
Q: What are the special challenges/pleasures of working with particular musicians, singers, ensembles and orchestras?

A: I’m mostly a solo artist, but I work occasionally with the Oriel String Quartet and the early music choir Vox Nostra, and when you share good chemistry and sense of humour, then you can experiment with any new musical ideas, and the music grows effortlessly.
Q: Of which works are you most proud?
A: I made an album called ‘Creation’ when I was just starting out. Barely anyone heard it at the time, but I still have a special place for it, because it was such a free and fertile period for me; I just went in any direction I wanted.
Q: How would you characterise your compositional language?
A: My compositional language flows interchangeably between improvisational approaches, electronic production and “traditional” notated musical composition. I see my musical language as a combination of meticulous precision and planned structure, but on the other side – loose, impulsive, wild.
Q: How do you work?
A: Occasionally you have “divine inspiration” and a clear idea just comes to you. Other times, there’s nothing, you’re staring at a blank canvas. You just have to start with something, anything. It only reveals itself to be something compelling after you’re knee-deep in it, several hours later.
Q: Who are your favourite musicians/composers?
A: I couldn’t really list all of my favourite composers, but I would say Squarepusher (Tom Jenkinson) is someone who opened my mind to the possibilities of merging instrumental playing with electronic programming, and not compromising either one. Currently I’m listening to a lot of Brandt Brauer Frick – I’m not so much into live Techno bands, but this trio is really unique.
Q: What is your most memorable concert experience?
A: I played a concert with an astronomer, in front of an Aztec pyramid. It was a collaboration with a Canadian Astrophysicist John Dubinski, at an astronomy convention near Puebla in Mexico. We presented a concert alongside videos of galaxy formations in front of the Great Pyramid of Cholula. Once the concert started, suddenly the winds picked up, and violently blew over the massive screens several times. Maybe the gods weren’t pleased with us…
Q: What do you consider to be the most important ideas and concepts to impart to aspiring musicians?
A: I hesitate to try imparting wisdom to anyone, since their situation will be different than mine, but if I had to say something, the first thing that comes to mind is: Resilience.
Q: Where would you like to be in 10 years’ time?
A: Living in the countryside, somewhere with trees…
Q: What is your most treasured possession?
A: One of my most cherished possessions is my mother’s cookbook from 1981,  “Ah, Cooking the Middle Eastern Way!”
Q: What is your present state of mind?

A: A mixture of excited, eager, apprehension, goofy, worried about the world, like everyone else.