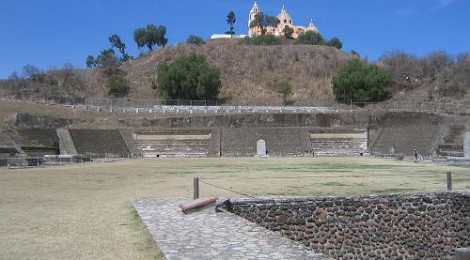 Here’s a little synopsis of this strange, unpredictable and wonderful
performance in Mexico from 2007… hope you enjoy! Pics are at the bottom of the page.

Toronto Astronomer John Dubinski was invited to give a talk at the
Mexican National Conference on Astronomy, held at the Observatory in
Tonantzintla, outside of Puebla, Mexico’s 4th largest city (approx 4
million people). The director of the conference, Omar Lopez-Cruz, also
asked if we could do a performance of our project, Gravitas
(Dubinski’s visual simulations of galaxies forming and colliding accompanied by
myself  performing my music), on the final day of the conference. The
concert would be held at the archaelogical site of a pyramid which
dated back some 2000 years. For those of you who have teased me that
this is like Ianni at the Acropolis, for your information, the reason
for the site was not just because it was an inspiring setting for a
concert, but because the pyramid had been used as an observatory for
astronomy.

The Great Pyramid of Cholula was a monument that had been started
before the Aztecs arrived on the scene. Apparently each successive wave
of people had added to the structure so that over centuries it kept
getting larger and larger, and by the time of the conquistadors, it was
already the largest monument in the world (the Great Pyramid of Giza is
taller, but of less girth and volume), although mostly in a state of
neglect and buried largely under vegetation so that it appears more
like a very large hill. The pyramid had been dedicated to the worship
of the pantheon’s chief god, Quetzalquatl, serpent-god of the air (and
other things, depending on which source you’re getting it from…. my
erudite source is AD&D’s Deities and Demigods). The Spanish plopped
a church on top of the hill, but the front facade of the pyramid has
been mostly restored, and that’s where the concert was to be held.
According to Dubinski, under the Aztecs the altar saw humans sacrificed
quite frequently (about one every few weeks).

Some of you may remember the somewhat infamous story of what happened
to my Nord Synthesizer last fall in Toronto’s Nuit Blanche (a disgruntled
person attacked my equipment during my outdoor performance and flung
my Nord into a pool of mud, causing some damage and stunning the audience),
and since this is part of my music making I wanted to have one rented,
in addition to the sound system, mixer and grand piano they were going to provide.
It wasn’t available so I had to lug it all the way from Toronto in a hard case (this actually comes
into play later on).

On the day of the performance we were a bit worried about being rained
out, and it was a bit cloudy, but fortunately didn’t rain. I requested
to go to the location as early as possible to set up and make sure any
technical problems could be avoided. This ended up being slightly futile.
Around noon we started setting up. The stage that was assembled was huge,
way larger than was needed for me and my equipment, and seemingly very
unstable – I was worried the legs of the grand piano would puncture the floor
and after I played a loud chord would cause a disaster during the performance.
But just as I was getting started the audio-visual crew said they wanted to wrap up
and come back in a few hours. I felt that we should keep going and have a full sound-check
to make sure everything really works, but after a bit of a tug-of-war we disbanded.

When we came back later, only a few hours before the concert, the wind
was picking up. The two large projection screens that were being
assembled on either side of the stage were posing some difficulty, and
flapping a bit like sails on a ship. The piano was delivered and
thankfully was stable on the platform.  But now that the sound system was in place, I was really anxious to try my gear as soon as possible,
even while the piano was being tuned. I wanted to set up all the synth
sounds, but everytime I’d come back to the synth, it had re-set
itself, and I thought I was being forgetful. Finally I started playing some
bass sounds on it through the house speakers, but every time the bass
sounded, the synth would turn off and start re-booting. It turned out
that the power supply was very unstable since it was outdoors and out
of the downtown core, and they needed a regulator.

Meanwhile the wind was picking up more and more and it really seemed
that the screens, some 30 or 40 feet across, were going to blow away in
a potentially dangerous way. I mentioned a few times that some people
should be permanently stationed on either side of them to prevent this.
Surely enough, one of them blew over quite suddenly, and so they re-set
it, this time drawing metal wires to pegs in the ground to provide
support.

In the previous days we had made jokes that the gods may be pissed off
by our concert and cause rain on the day of, but oddly enough it was
quite dry, but suddenly very chilly and extremely windy. As the
audience started seating themselves, both screens looked extremely
flimsy. The piano was tuned and everything except for my Nord was
working smoothly. The audience seemed to me to be a mixture of Mexicans
from nearby and American tourists, both of which had probably seen the
many advertisements for our concert throughout Puebla. Somewhere
between 300 and 400 people ended up attending, filing up half of the
seats laid out in the field.

Checking my synth once again only 10 minutes before the show; it is now
turning off-and-on every 5 seconds, and Omar offered to try to get a
regulator for it, but it seemed pretty clear to me that this would
cause way too much panic and stress before playing and would cause the
audience to become restless, so I had to cut my losses and ditch the
Nord even though I had lugged its heavy ass all the way from T.O.

As for the screens,  I’m not sure if anyone was manning them or not,
but suddenly the one of the right of the stage blew violently over,
thankfully harming no-one but eliciting a gasp from the audience. They
started trying to re-assemble it but I put in my two-cents, saying
better to ditch that as well and just go with one screen than try
desperately to somehow get it up and secure again unsuccessfully in
front of the audience.

So we started the show with one screen, piano and laptop. At this point
the wind was blowing so violently that sometimes in the middle of the
music, the piano mics would distort and for some reason blare an
overwhelming bass tone that would over-rule my music for a few seconds.
The laptop screen was blown back so far that I could barely read it,
and was in danger of blowing into the insides of the piano. I was in
fear that the lighting rig behind my back would become airborne and
maim me as well. It was so cold up there, in between pieces I would rub
my hands together frantically to try to get some heat (this was
embarrassing as Puebla TV was on stage filming me while I was
shivering). I had to choose my notes carefully as my fingers were
getting stiff in the cold.

As I was watching the screen, every single person was on edge as the
wind played havoc with the screen and people were pulling on it like
manning the sails of a ship in a storm. At this point my musical
soundtrack was less following the image of a spiral galaxy and more
mirroring the concave-convex fluctuations of the screen, I was plucking
madly in the higher register as if something was about to pop, and
surely enough it did — the remaining screen went down with a thud, a
second gasp from the audience, and my music samples from my computer
are still looping, but I’m not playing the piano.

I stop the computer and for a few seconds no one has any idea what to
do. At that moment I’m the only thing that the audience can look at.
I repress all of my frustration and turn to them with a smile and say
‘Uno momento!’ which thankfully brought about some laughter and
dissipated the tension.

Dubinski, Omar and I quickly met backstage and it seemed useless to put
up the screen again when it would have to be untangled and would
probably blow over again. So they decided to project onto the pyramid
itself, onto one of the altars which was an upright stone slab weighing
several tonnes. Out of everyone there, only one person came and
demanded her money back. It was one of those wonderful situations when
the audience is completely on your side, and several hundred people
moved all of their seats in a very cooperative and organized fashion,
repositioning in front of the altar. We continued the concert from
where we left off, despite the wind keeping up and the occasional
distortions. At the end we were met with thunderous applause and calls
for an encore! This was a huge relief as at several points it seemed
like the show seemed completely sabotaged.

Somehow, in the end, all of these elements that were working against us
ended up bringing the us and the audience closer and they felt like
supporting us rather than storming out, making the end result somehow
even better than if everything had gone smoothly!

Here are some pictures of before and during the performance, taken by John Dubinski.

setting up on stage

the second giant screen that would come violently tumbling down

freezing and playing the piano 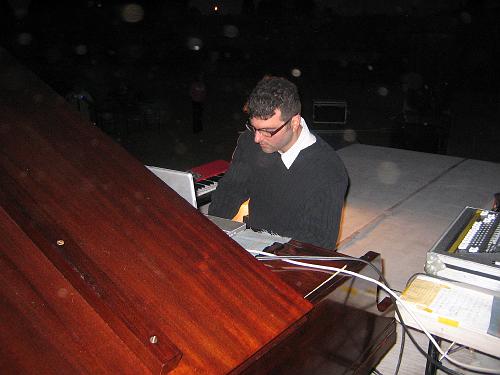 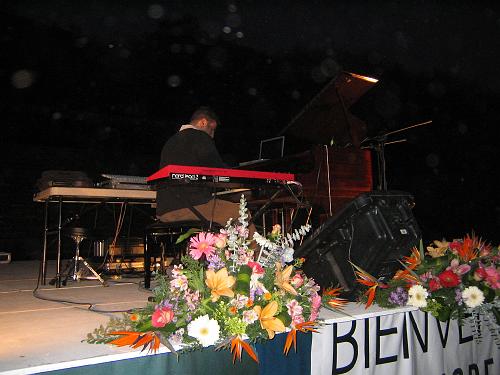