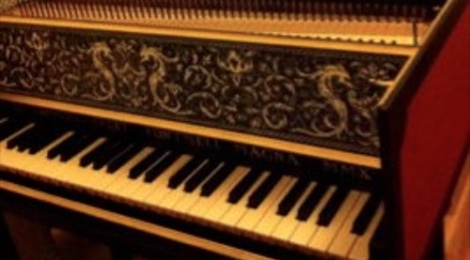 This recording was made on a keyboard tuned in a “quarter-comma mean-tone” temperament, a period tuning favouring certain keys and intervals over others, in this case leading to more pure and brilliant 3rds (so long as one avoids the so-called “howling fifth” of G# – D#).

A ground is a musical form that shares certain traits with Jazz, in that it features repeating harmonic cycles with continuous variation, similar to “playing over the changes” in Jazz. The harmonic “changes” of this piece are: A-, E+, F+, E+, G+ C+, E+, A+, but the fluid counterpoint and voice-leading often blur the “either/or” relationship between major and minor keys, leaning toward a more sweet and sour sound-palette. Byrd was a master of incrementally developing his variations, starting with simple, sombre statements of harmonic blocks accompanied by a bare melodic outline, progressively building to relentless, elaborate and intricate patterns in the later variations.

[*historical note, if you’re into that sort of thing: this would have been originally played on a Virginal, not a Harpsichord.]